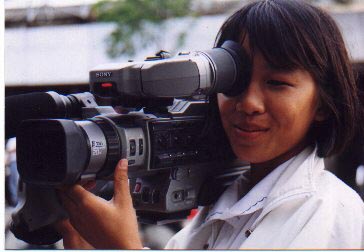 I was born in Daklak province, a coffee-growing province in central Vietnam. I had no father and lived in a poor family. When my mother died, when I was fourteen I had to leave school to work with my brother but we did not earn enough money to live on. I left for Ho Chi Minh City. Shortly after I arrived all my money (VND200, 000/ $16) was stolen by a cyclo driver. I wandered around the eastern bus station. I wandered all day and lacked so much energy that I fainted of hunger.

One night in Ho Chi Minh City, I was sleeping on a bench in Quach thi Trang Park when a friend of mine came to me and asked if I wanted to live with him in a shelter. He said that I would certainly not have to pay any money for the accommodation. He also added that the social workers would help me with knowledge and skills so that I could find a job later. To my delight, I was welcomed and encouraged. When I was asked if I had a plan or what skill I wanted to learn, I said that I dreamed of being a cameraman. Soon I joined the Street Vision class to learn photography. One day, in class I saw a bird fly past the window – I thought of it as an omen. A few hours later a man and woman from the Czech Republic visited us. The woman had a video camera; she began working with us to teaching us how to use it. I felt so happy.